Our volunteers at the Presidential Library want to show you the long journey of the McKinley Correspondence Project.

To start, we want to tell you our motivation for pursuing this project. One of the major aspects of the library is making sure our information is accessible, especially for our researchers who dedicate their time to finding answers. Our volunteers at the library take their research requests very seriously and we have systems in place so that information in our library can be accessed by our volunteers and archivist.

Our project began around 2005 with one our current volunteers, Judy Pocock and Janet, a former McKinley Librarian. At the time, the Presidential Library was not how it looks today, and it wasn’t as organized or put together for accessibility. There were many projects that needed to be started and one of these projects was the McKinley Correspondence documents. This project consisted of letters to and from William McKinley during his life. They began by thinking of the different directions they could go with this project, and where to start.  It is so important to have a plan and take the time to think before you start on your project. The main goal was to find some way to summarize and put the letters in chronological order. Judy began to write out abstracts for each letter, which was a daunting process because most of the letters are handwritten. It was very time-consuming, but they were able to get a majority of them completed before Janet, the former librarian left and the project was put on hold.

This brings us to 2016 when our current archivist Mark Holland attended a conference about managing, conserving, and preserving archives. There he learned that keeping documents in binders with sleeves was not appropriate protocol anymore and he began to think of ways that they could house the McKinley Correspondence letters properly. There was a major obstacle in the way: retail stores do not sell the correct length and height of the documents. Thankfully, he was able to work with a company who put him in contact with a third-party and they were able to create custom made ring folders. These folders would allow the strain to be placed in the folders and the housing and not on the documents themselves. Once that part of the project was completed, there were still more steps that had to be thought out. The letters had to be transcribed and have correct abstracts so they could easily be found. The letters were transcribed by our volunteers, Susan Henry and Judy Pocock and former Office Manager, Rita Zwick. This part of the project took years to be completed. Volunteer, Rosemary Shaheen spent many hours entering data on the letters that researchers can find online.  Moving on to 2018, our library had an intern from Walsh University who began working on the digitization process of the project. Samantha did more of the technical side of the project by scanning and adding each piece of the sleeve to our database using our museum software. After the scanning and cataloging was completed around December, those involved in the project were able to see the results of their hard work. After having a couple of meetings to discuss the next steps, Judy and Samantha worked together to put the sleeves into our custom-made folders and create labels for each file folder, making sure everything was in chronological order and placed in the appropriate area. We are so excited to have this project completed, as it makes our research easier and more effective than just leaving it in huge binders with documents spanning five years or more per binder. 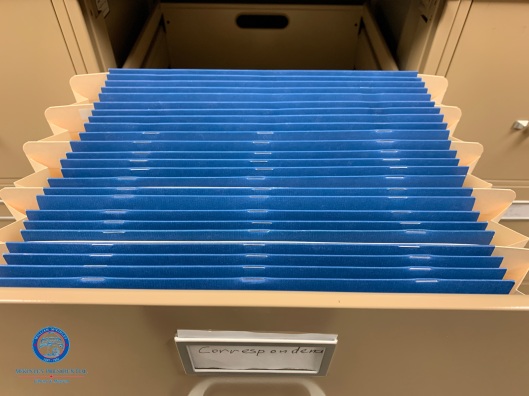 Completing the McKinley Correspondence project was extremely important because we can track what William McKinley was doing and who he was writing to during his life and even letters written by people close to him confirming his death. These documents are very important to the Presidential Library because it relates to William McKinley as a citizen of Stark County, and it  gives historical documentation about the 25th President of the United States.