A Little Then & Now on this Wednesday Evening… Then, the Canton Pvblic Library on the South East corner of 3rd Street and South Cleveland Avenue SW. Now, a Law Firm. 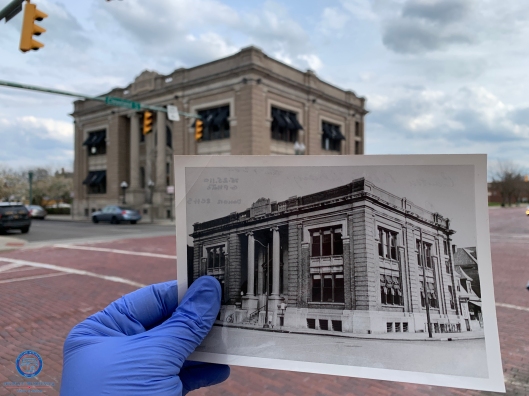 This is a continuing series of stories about the donation of black & white negatives we received in January of this year from a gentleman in Kentucky.

In a previous blog on February 21st Majorette Found in Middlebranch… we introduced you to Victory Chapman who photographed many weddings in the Canton, Ohio area in the 1940’s and 1950’s. Victory was born on the last day of The Great War, participated in the Pacific Theater in WWII and had a long career at the Timken Company in Canton.

Eric Chapman writes: My dad was born on November 11, 1918 – the day WWI ended. When my dad was 17, he heard that the Timken Company was hiring, so he went right down there and applied, lying on his application that he was 18. The gentleman that interviewed him said something like this: “Hmm, you were born exactly one year to the day before WWI ended and your parents named you Victory? They must have had amazing foresight!” The guy hired him knowing full well he was only 17. He worked there for 46 years, retiring in 1982. Eric Chapman continues, my dad was a chemist and he worked his way up from the bottom of what he called the “Chem Lab” becoming chief chemist sometime in the mid to late 1970’s. When he retired, he was the last person in that position in any steel mill in the country with only a high school degree. Victory Chapman is a Marine Corp Veteran and fought on Okinawa in the Pacific Theater. He must have stopped over on Hawaii because there are photographs that appear to have been shot by him, and a small collection of period postcards of the islands. He also documented the First Marine Division cemetery, his barracks, some of the natives, and their lifestyle, the landscape, military trains, and Bolo and Yontan airfields.

These are just a few of the printed photographs in this archive, wait until we get to the negatives!

Thank you to Eric Chapman for his contribution to this blog, and the wonderful donation of invaluable photographs.

Mark Holland, Archivist of the McKinley Presidential Library & Museum, helps to express as a museum our support to the people in the medical world who are fighting CoVid 19, and treating the patients as well as the disease. Today we present to you Part III and the conclusion of a series on Mercy Hospital. We want to show you the origins of our local medical institutions and personnel 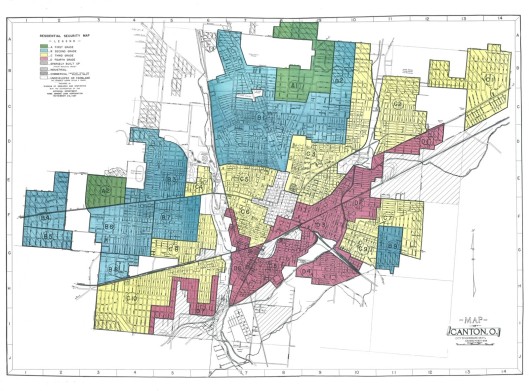 In 1933, in an effort to forestall foreclosures during the Great Depression, Congress established the Home Owners Loan Corporation (HOLC). In a bid to obtain Southern support for the measure, President Franklin D. Roosevelt and his New Deal supporters allowed for certain provisions within the act to discriminate against Blacks and other minorities. For example, when it came to mortgage assistance, neighborhoods were color-coded for certain racial, ethnic, and economic indicators to maintain a pre-existing de facto segregation of neighborhoods. The use of a red marker to designate majority black neighborhoods gave the practice its name: red-lining.

The map above is a 1937 copy of the HOLC map for Canton. Four different colors highlight sections of town from “First grade” to “Fourth grade.”  For example, those neighborhoods shaded in green (Harter Heights and Ridgewood) were in the First Grade; the most desirable and “exclusive” housing which were attractive to home-buyers even in the most dire economic conditions. The grading was based on statistics gathered by the Division of Research and Statistics under the auspices of the Federal Home Loan Bank Board and included general descriptions and numerous demographic characteristics such as foreign-born families, “negro” population, “relief families,” the nature of those moving in (also referred to as “infiltration”), construction patterns, three year mortgage and price ranges, and other numbers and factoids. In the HOLC analysis for Canton, the Harter Heights neighborhood was described as an area that had paved streets, but was also ‘highly restricted.” Most inhabitants were “professional men and junior executives.” There was also an “infiltration” of “desirable.” The estimated income of residents in the Heights was between $3,000 – $10,000 at a time the national income average was $1,780.

On the opposite end of the spectrum, the Fourth Grade sections of Canton, described as an area in Canton’s southeast neighborhood with factories and railroads to the north, was on a “downward” trend of desirability. Primarily, inhabitants were laborers with a 10% population of Italians and 80% “Negro.” In its clarifying remarks, the appraisal mentions that this is a “colored section” with a “lower class of Jews and Italians.” The annual income was between $800 and $1200 with only $0% of the residents owning their homes. The infiltration of new residences was characterized as “undesirables.”

The residual effects of redlining was to reinforce and solidify a segregated city through the decades. Obviously the pattern was set before the HOLC appraisal, but in 1937 redlining was federal policy. In the absence of favorable and fair bank mortgages, the ability for individuals or others to transform or improve neighborhoods became restrictive and virtually impossible. Likewise, home ownership and home improvements were rare and the cycle of poverty in these areas became even more stubbornly entrenched with race-based government policy, restrictive covenants and reluctant financial institutions. Absent economic and political growth lead to a decades-long, gradual abandonment of basic retail, medical and other basic resources vital for the well-being of residents in these neighborhoods. For example, the disappearance over the years of grocery stores resulted in what has become “food deserts,” i.e. areas absent of any fresh, nutritious food. Likewise, the mortality rates, health standards, education standards and other “quality-of-life” indicators all suffered accordingly. Even today, many of these houses still have lead-based paint on their walls with the resulting negative effect on child development.

These patterns exist throughout urban areas in the U.S. with the same results of negative health, education, income disparity with surrounding neighborhoods. The likelihood of crucial health concerns such as cancer and obesity, food deserts, mortality rates, and other outcomes are closely tied to zip codes which, in turn as the redlining map reflects, is likely to be based on race or ethnicity.  Though redlining has become illegal, other policies at both the federal and state levels have reinforced this de facto segregation. Urban renewal in the 1950s, 1960s and 1970s oftentimes reinforced the boundaries of segregated communities. Construction of interstate highways such as Route 30 divided and physically isolated once vibrant communities. Today, the risk of default on low apprised housing allows banks and other financial institutions to refuse mortgages. Hence, the possibility to begin the revitalization of neighborhoods becomes an even more Herculean task as the past history of redlining reverberates into our present.

Mark Holland, Archivist of the McKinley Presidential Library & Museum, helps to express as a museum our support to the people in the medical world who are fighting CoVid 19, and treating the patients as well as the disease. Today we present to you Part II in a series on Mercy Hospital. We want to show you the origins of our local medical institutions and personnel.

A little Then & Now on this Wednesday evening! Then The Canton Daily News.  Now Repository Newspaper located on the Southeast corner of South Market Avenue and 5th Street. 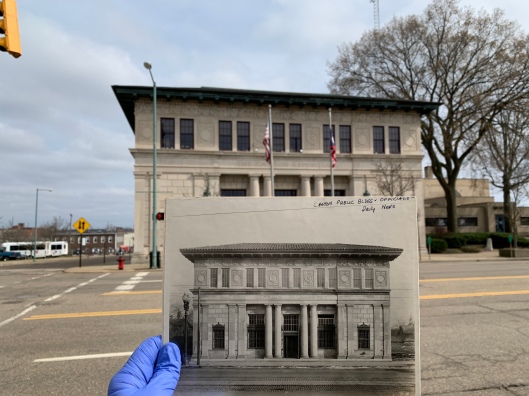 Mark Holland, Archivist at the McKinley Presidential Library & Museum, helps to express as a museum our support to the people in the medical world who are fighting CoVid 19, and treating the patients as well as the disease. Today we present to you Part I in a series on Mercy Hospital. We want to show you the origins of our local medical institutions and personnel.

The Walsh University Com 365 Writing for Advertising and PR service-learning class has partnered with the McKinley Presidential Library & Museum to promote “A Walk with the President” in Stark County.

“The Walk” consists of twelve stops in downtown Canton in which President William McKinley had an historical impact.

The Walsh students, working with the Museum’s Archivist, Mark Holland are planning a virtual First Friday on April 3, and contributing content for the Stark-Tusc County Cultural Collaboration. The Collaboration is many of the Stark and Tuscarawas County’s Museums sharing content Monday – Saturday on Facebook.  The McKinley Presidential Library & Museum will be sharing the students’ content on Monday, April 6 at noon on its Facebook Page.

Student teams recreated the museum’s brochure and produced table tents and posters for local businesses.  In addition, the class has contributed to the Museum’s social media presence and has shot video content with QR codes for stops along “The Walk.” The goal of the class is to use each student’s talents for different elements of the project. These videos will also enhance the McKinley Museum Mobile App and as a patron walks with the President, he or she will have additional information about each stop along “The Walk.” Link: https://www.vamonde.com/adventure/a-walk-with-president-mckinley/781

The class met on Zoom with Professor Lee Horrisberger and Archivist Mark Holland for the second half of the semester. Students used this time to plan and coordinate tasks for “The Walk,” give and receive feedback and to support their peers when needed.  Jennifer Loudiana, Director of User Support and Classroom Technology at Walsh University also has been attending online meetings to assist with the technology being used and to help if trouble arises.

Please enjoy an overview of the Walsh University COM 365 Writing for Advertising and PR project by clicking this link:   _________.