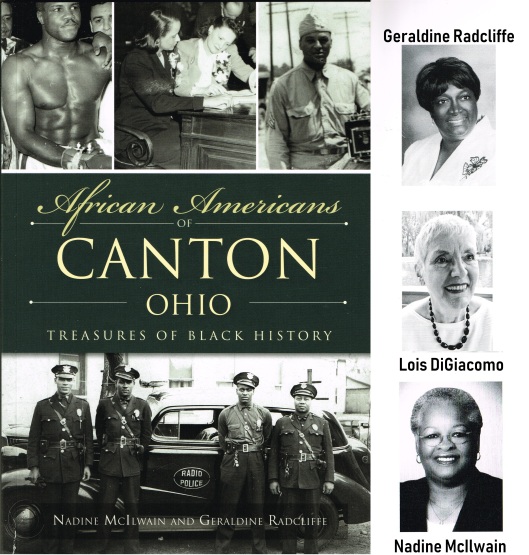 Our team at the McKinley Presidential Library invite you to read about Nadine McIlwain and Geraldine Radcliffe, authors of “African Americans of Canton, Ohio: Treasures of Black History” and members of our local community! Our volunteer Samantha Weaver spoke to them during their time here on Saturday, May 18th while they were at the museum to promote their book and share their story of how their book came to be.

Nadine McIlwain is a former teacher, that worked at Timken Senior High School for 25 years, she was also a principal. She is a writer herself and has published books before, mainly biographies. Geraldine Radcliffe, or Gerry, has worked in healthcare most of her life. She is a history buff and has had her work published in several medical journals.

Nadine and Gerry started this project in 2004 with the idea to writing about African-American history in Stark County. After some time, they decided that was too broad and chose to shorten the goal to just the history of Canton from 1805 to present day. They then formed a committee with some important people in Canton to see if the appeal was there. People were really interested and it started to take off with different stories and research. In the end, this book celebrates legends and prominent people who lived in Canton and Stark County and finally tells their stories through a historical narrative previously untold.

Nadine wrote the manuscript for the book and had to incorporate all of the personal stories into one big story to connect them. During this 5 year process, she chose to write about the positive events and people. As a historian herself, she knows that it is not fully authentic, but during a time where everything is publicized and made to be seen in a negative light, she wanted to take a different approach. The full process of completing the book took close to 15 years to complete and get published. There is a lot of research that went into this book, from authenticating family history and stories, to identifying the people in each of the photographs. It was not an easy process, but with the help of local organizations like ourselves and the Stark County District Library, they were able to find out about the local history and prove or disprove stories. When Nadine finished with the manuscript, they were able to find a publisher to look it over. The publisher agreed to publish the book, but Nadine had to shorten the manuscript from 800,000 words only 65,000 words and 84 photographs. She mentions that this was a hard process because she loved everything she wrote and wanted to include everything. She ended up shortening it, and the book “African Americans of Canton, Ohio: Treasures of Black History” was published on April 13, 2019.

The personal process of the book was a big commitment and wasn’t easy. Both women say that it is important to get people involved because the process cannot be done alone. There are long hours of research that go into writing an accurate history book, especially when every aspect has to be proven accurate. Most stories were only spoken and passed down through the family, but were never formally written down. Every story is connected somehow and that is how people will find their own connections when reading the book. Nadine explains it as a giant spider web where one story leads to another and another and so on. You can start with one person, find out about their parents and their family and how they impacted the city just through that one person.

One aspect that surprised both women while researching was finding out just how much history died as the result of integration and the demolition of African American neighborhoods and buildings in Canton. Gerry emphasizes how much time erases history and before it is completely gone, it should be written down somewhere. The telling of history makes you take a hard look at yourself and your own history. She asks herself “What will I leave after I die?” While she is here, she wants to leave a piece of herself to prove her existence. This book is that piece of her time here in the world.

As for future projects, both women do not believe that they will be the ones to write a Vol. II because of other ongoing projects. Nadine is working on another book herself and plans to continue writing for the rest of her life. She would like to begin writing young adult books in the future because she wants to reach out to a younger audience. As for Gerry, she also has a book in the works. Her book is about African American history vanishing as a community in Stark County and she has been in this process for the last 12 years. As we can see, there is no stopping these women and there will always be more to come from them.

We thank both of these wonderful women for coming into our museum to sell their book and tell their story. We hope that more people will be inspired and find the dedication to do as these women did and write a Vol. II or begin researching their own history so it can be passed down. Their book “African Americans of Canton, Ohio: Treasures of Black History” can be found online and also in our museum shoppe for anyone who would like to purchase it.